Isle of Man to host six-discipline Adventure Race in June 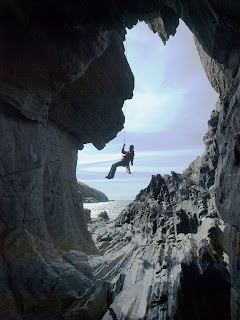 Plans have been announced for what is believed to be the first event of its kind in the Isle of Man – an Adventure Race covering six separate outdoor disciplines.

The man behind the project is Keirron Tastagh, Director of Adventurous Experiences and organizer of the well-established Isle of Man Adventure Week.

He said: ‘This is something I have wanted to host for a long time but now some of us have got together and designed a special format which will be the climax to the Adventure Week in June.

‘It will be a new concept incorporating a lot of different activities put together and varies from the triathlon where you have three definitive disciplines.  An Adventure Race is a mixture of adventure sports and there is no doubt it will be physically challenging but is aimed at amateur sportsmen who will come here, have a look at the Isle of Man, and compete in a fun way.
We are not looking to attract professional athletes, but rather people who are keen to train and give something a go.  The event is for teams of four and we have already had expressions of interest both from the Isle of Man and the UK. Adventure Week has been expanded to include activities such as coasteering, sea kayaking, gorge scrambling, abseiling, rock climbing and sea fishing, all with the intention of introducing visitors to the attractions of the Isle of Man.  As far as the Adventure Race is concerned I would be happy to receive entries from around 15-20 teams in the inaugural year and then build on this in the future.’

The race will be spread over the last two days of the Adventure Week (June 26th and 27th) with three disciplines each day.  These are: a 1km sea swim,  a 12km sea kayak race, a 12km mountain bike course, 8km hill run, 80metres rope ascend and 800metres of coasteering. Two members of the team have to compete in each event, apart from the sea swim where only one is required, although they can enter more team members if they wish.  The intention is also to accommodate individual competitors who are not members of any team but would like to take part in some of the racing.

All aspects of the race will be professionally recorded by Manx Timing Solutions under the sport indent formula where each competitor is equipped with a micro-chip. A prize presentation takes place after the second day of competition with awards based on the total time taken.

The format for the race will feature the sea swim, sea kayaking and mountain biking on the first day, followed by the hill run, rope ascending and coasteering 24 hours later, although the order may be changed depending on weather conditions.

The entry fee is £60 per person which includes insurance and lunch each day. The location of the Adventure Race is a closely guarded secret for the moment but an announcement will be made nearer the time so members of the public can go along and watch.
Press Contact: Keirron Tastagh – Director of Adventurous Experiences.
Tel: 01624 843034 or e-mail: info@adventurousexperiences.com

Editors Notes:
Adventure Week was launched in 2005 to promote the Isle of Man as an outdoor adventure playground.
In 2010 it will run from the 19th June to 27th June. It will begin with a two day kayak fishing competition. Prizes will be on offer for the longest fish and the most species caught as well as special awards for the best photographs and ‘the most bizarre wildlife encounter!’ This has also been turned into a competition for the first time as; previously, sea kayak fishing only took place as part of expeditions around the coast.  The competitive aspect originated in the United States but is now an accepted sport in its own right.