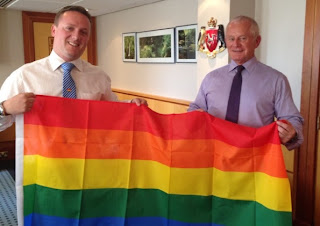 Lee Vorster, from the organisation, said : ‘The gay community and its organisations had become very scattered on the island.
‘There was the LGBT (lesbian, gay, bi-sexual and transgender) organisation and we’ve kind of evolved from that.
‘What we’re trying to do is bring everyone together.
‘We have four main objectives of the organisation which are contact, provision of information, education and representation,’ explained Lee, who is a naval officer.
Lee presented a rainbow flag to Mr Bell. The flag has been adopted by gay, lesbian, bisexual and transsexual communities around the world and has been flown for the last two IDAHO (International Day Against Homophobia) days at the island’s police stations.
The group has registered to become a charity and Lee continues: ‘We’d like to become an anchor for the community.
‘We’ve had great support from the UK but we want to work with the departments and resources we have here in the Isle of Man.
‘This is the type of thing we discussed with Chief Minister Bell recently and we have meetings planned with the education minister and the Treasury Department,’ adds Lee.
‘Things like transgender can be an especially sensitive issue for people and we just want to give them support here on the island if they need it.’
Lee feels that the island has an unwarranted bad reputation.
‘We had someone visiting us from Ireland recently and they googled the Isle of Man with gay and the top ten results are all negative, which actually put them off coming over until we explained it wasn’t like that,’ says Lee.
The charity also met with public health staff and the Isle of Man HIV Support Group on Tuesday, who described the meeting as positive.
For further information about the organisation visitfacebook.com/TheManxRainbowFoundation or www.manx-lgfs.com
Source: http://www.iomtoday.co.im/news/isle-of-man-news/isle-of-man-s-gay-organisation-meets-chief-minister-1-5843654