The late Dusty Miller, commemorated in these stamps, became one of the most influential cartoonists on the Isle of Man and nearly 50 years after his death remains firmly established in the public’s consciousness.
Harold ‘Dusty’ Miller was born in 1898 and although fortunate enough to win a scholarship for a place at the Liverpool School of Art at the age of 13 he was unable to take advantage of it because of financial circumstances. Instead be became a telegram messenger boy for Liverpool Post Office aged 14.
His obvious talent resurfaced during World War I when he designed a Christmas card in 1917 whilst in the trenches, which was adopted by the Postmen’s Federation and sent to postal workers serving in the armed forces. By 1919 Miller had joined the Liverpool City Police and subsequently designed a Police Roll of Honour.
Health problems prompted a move to the Isle of Man with his Manx born wife in 1926 where he took on the role of advertising manager and artist for both the Isle of Man Times and Examiner newspapers. His eye-catching and elaborate cartoons were produced to strict weekly deadlines and were often drawn at home. His impressions of Manx life embraced both people and events, straddling both satire and topical matters. His main body of work fell between 1933 and 1962 capturing the thrust of political and social issues of the time.
Miller was sensitive to public sentiment which influenced his cartoons, although morale-raising and conscience-pricking propaganda also contributed to his artwork. He had an uncanny knack of visually highlighting social problems with cunning accuracy in an immediately recognisable style. 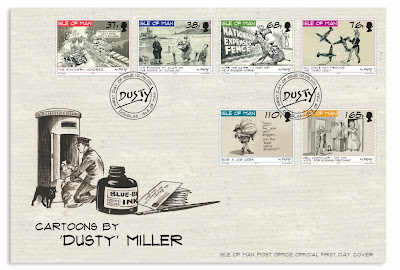 Pronounced physical characteristics were useful to Miller who would deliberately lengthen a long nose, or extend a jutting chin for greater effect. And someone with a habitually lugubrious countenance was apparently ‘simply asking for it’.
Miller’s work using oils and water-colours led to a role as founder chairman of the Isle of Man Art Society in 1953, with his dream of an annual Easter art exhibition becoming a reality ten years later.
Former colleague and founder of Isle of Man Post, Victor Kneale, suggested that Miller, who had produced two stamp designs during his career, would have been an ideal choice to design commercial postage stamps.
Miller, who died in 1964 aged 66, also produced the popular book ‘It’s a Fact’ during the late 1930s containing a series of cartoons depicting important and lesser known facts of Manx history, which was subsequently reissued in 2009.
Valerie Caine © April 2011