↓ Skip to Main Content
Home › Uncategorized › It was twenty years ago…

It was twenty years ago… 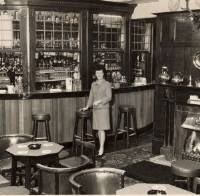 The Dog’s Home
The pub called time 20 years ago and we still miss it – even Marks and Spencer, which was built on the area it once occupied, doesn’t compensate for its loss.

Knocked down in August 1989, the pub is still very much alive in the minds of its former regulars. Built in 1857 and officially named the Victoria Tavern, the Drumgold Street pub was frequented by every kind of drinker under the sun — from binmen to bankers. Its long-time landlords were Peter and Muriel McAleer, who ran the Douglas drinking hole for 23 years.

The McAleers, along with their son Robert and daughter Sharon, welcomed thousands of customers into their oak paneled pub to enjoy the coal fire and friendly atmosphere.

‘There was a farmers’ market out the back and farmers went in to the pub for a drink and left their dogs tied up outside so it just became known as the Dogs’ Home,’ said Robert. ‘My parents regularly won the newspaper award for best pub. They were the best known publicans on the Island.’

Robert, 56, ran The Creek Inn in Peel after buying it in 1976 and is now the landlord of the current Victoria Tavern in Victoria Street. He said: ‘It was a fantastic atmosphere. Everyone knew each other. It was absolutely diverse. There would be someone drinking half a bottle of champagne next to someone having half a bitter.’