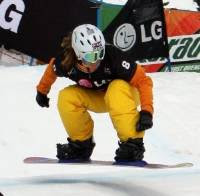 This is a credible placing after the Ronague woman was forced to take evasive action when world number one Lindsey Jacobellis (USA) crashed just after the start of the race.