Kelly McCarthy Posted on March 27, 2012 Posted in Uncategorized
The successful revival of Manx Gaelic has attracted much publicity for the Isle of Man during recent years, with students of other languages keen to discover how revivalists have established such a remarkable change in fortune for the Island’s native language.
Although still seen by some as a dead language with no real efficacy in a contemporary setting, there’s clearly another camp who beg to differ, beating a well-trodden path to the door of the Manx Language Development Officer, Adrian Cain, from all corners of the world in pursuit of advice and assistance in the lively arena of language survival.
Hanan Bordin, of the Hebrew University in Jerusalem, already had an interest in minority languages before visiting the Isle of Man last year and during his three week stay with members of the Island’s Jewish community broadened his knowledge of Manx Gaelic, by visiting key players involved in the revival of the language. 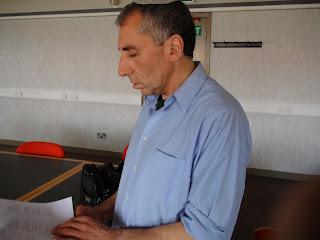 Bordin’s visit has now resulted in lectures about the Manx language in both Hebrew and Yiddish at the university based on the theme of the current situation of the Island’s native tongue.
Adrian Cain, the Manx Heritage Foundation’s Manx Language Development Officer, commented, “Hanan’s trip to the Island had been fantastic and reinforces the linguistic ties between Manx speakers and other linguistic communities. His enthusiasm for all things Manx was an inspiration to us all and illustrates the international reach that the revival of Manx has had”.
Valerie Caine © March 2012