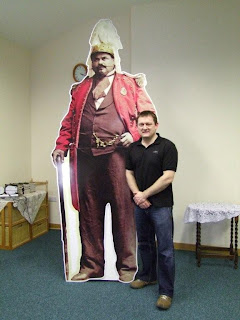 As many of you know John from his worldwide Manx tour, here’s news of his new book. He agreed to write about the extraordinary life of Arthur Caley after being approached by one of Caley’s descendants, who was becoming more and more frustrated by the inaccurate reports about his famous relative.

Despite this it still took John two years to write this comprehensive biography, although some details are almost impossible to verify. John had been aware of Caley’s remarkable story from childhood and took on the idea with gusto.

John was accompanied by a life size figure of Caley, which dominated the room and encouraged everyone to have a better understanding of what life was really like for the man who was referred to as a true giant.  Not much is known about Caley’s youth, but extensive research on his life has revealed many truths and a large number of falsehoods. 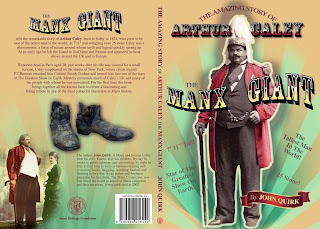 Often billed as the ‘Scottish Giant’ Caley was exhibited in both the UK and Europe, but mystery still surrounds the real reason why Caley left the Isle of Man. His ‘early’ death in Paris after being insured for £2,000, however, was not the end of the Sulby Giant as he reappeared in New York as Colonel Routh Goshen. Now part of Barnum’s empire he continued to appear as the ‘World’s Biggest Man’ for many years until his death in 1889.

Known latterly as the ‘Middlebush Giant’, Caley made a death bed spiritual conversion, confessing also that he was really Arthur Caley from the Isle of Man, but asked for nothing to mark his grave.