Johnny Jem Beg Puts Up for the Keys 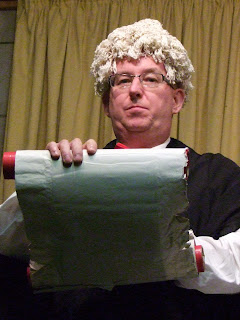 The General Election for the House of Keys may now be no more than a distant memory, but the Manx dialect play ‘Johnny Jem Beg Puts Up for the Keys’by J. J. Kneen was a fitting choice for the annual Oie’ll Verree Manx Concert.

Organised by Michael Heritage Trust and held in the Ebenezer Hall, the parochial charm of the local Oie’ll Verree still attracts a sizeable audience from all parts of the Island to its doors. Believed to be the only celebration of its kind actually held on the appropriate date, its ability to survive the onslaught of modernity is quite remarkable.
If you’re looking for professionalism, or perfection, it would be wise to collect your coat at this stage and slip out quietly, leaving those who remain to settle down expectantly to an evening of entertainment, with participation in an extensive home-made country supper almost obligatory.
Manx dialect poetry remains a clear favourite, as does the rousing melodies of Manx Gaelic choir ‘Caarjyn Cooidjagh’ under the enthusiastic leadership of Annie Kissack, but the appearance of ‘Scoill Daunse Yernagh Ellan Vannin’, (an Island based Irish dance school) showed that diversification and opportunity are prerequisites of a successful evening.
Local characters and Island MHKs become predictable targets for some performers, not least ‘The Deemsters’ who have developed a suitably dour persona to deliver their own blend of Island satire, whilst wearing a fetching pair of mop heads! Manx humour at its best. 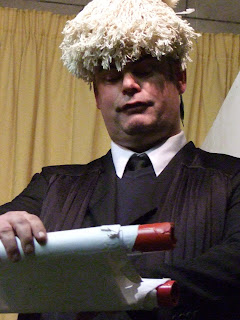 But without doubt it’s the dialect play which draws in the curiosity seekers. Once a popular social pastime, with its idiosyncrasies and unpretentiousness, the popularity of the dialect play has, however, declined over the years, as audiences seek out celebrity and sophistication.
We should, therefore, raise our hats to those valiant organisers such as Michael Heritage Trust who, although not alone in the challenge to retain some of the old Manx ways, contribute time and effort to this worthy cause. It’s a tribute to the Island’s sense of humour perhaps that Kneen’s writing skills can provoke such laughter and gaiety based on the troubles and vexations of a prospective MHK who loses his trousers!
Let the laughter continue.
Valerie Caine © January 2012 (inc photos)