Jonny Bellis gets back on his bike 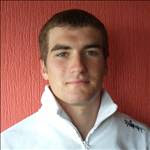 Jonny Bellis is targeting a return to competitive cycling in the next two to three months after half a year out. He remains hopeful of entering the Road Cycling World Championships in September, or the Commonwealth Games. The 21-year-old Saxo Bank rider came home to the Isle of Man at the weekend, six months after a scooter accident in Italy left him with serious head injuries.
He spent four weeks in an induced coma.  Jonny says it’s been a slow process and he’s delighted to be back on the bike again. There’s an interview here.