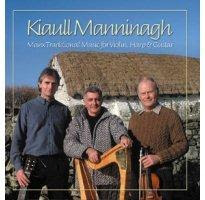 ‘Kiaull Manninagh’ features Manx traditional music for violin, harp and guitar and was originally issued in 1992. Bernard Osborne plays the violin and Pete Lumb, the guitar, but on this updated version additional tracks have been made available. This also meant they could incorporate the evocative sound of the Celtic harp, played here by Charles Guard. The harp plays two roles, firstly as a solo instrument, and secondly as a complementary voice with the violin. The musicians have also blended in sounds of the Manx countryside.
Most of the tunes highlighted on this sixteen track CD have been sourced from the Clague Collection housed in the Manx Museum, but others have been obtained from fellow musicians, although all the arrangements have been made by the three musicians featured here.

They bring with them an astonishing amount of musical experience. Violinist Bernard Osborne studied at the Royal Academy of Music in London, leading the viola section of the Academy Symphony Orchestra. He has worked as a professional violinist and viola player, peripatetic instrumental teacher, conductor and school teacher in public and private education, both on the Island and in the UK. On the Isle of Man he is closely associated with the Manx Youth Orchestra and was latterly the Head of the Isle of Man Music Centre.

A long time admirer of Manx music he has featured on several sound and visual recordings, been a soloist at the ‘Mananan Festival,’ and played with various orchestras in both Britain and Europe. He is also well known locally for his work with the Manx Folk Dance Society and the re-establishment of ‘Yn Chruinnaght’.

As a guitarist Pete Lumb spent time in various bands as a teenager, before studying music at Durham and then with the guitarist and composer John Arran. Spending several years as a freelance musician, he worked with a number of music services before moving to the Isle of Man. Head of Guitar for the Isle of Man Music Service, he has been involved in many music projects ranging from session playing to performing guitar concertos. He is a big fan of ‘world music’ and plays music ranging from Celtic to South American.

Charles Guard was born on the Isle of Man and after a local education studied at the Royal College of Music in London. He then moved on to Dublin to study the Irish harp, but remained in Ireland to teach and perform making several recordings for Claddagh Records, including a solo album and as part of a Scottish group known as ‘The Whistlebinkies.’ Currently Administrator for the Manx Heritage Foundation his involvement in music extends to writing and producing music for television and the release of numerous cassettes and CDs.

Produced with the assistance of the Manx Heritage Foundation, ‘Kiaull Manninagh’ is available priced at £10.99. www.manxheritage.org