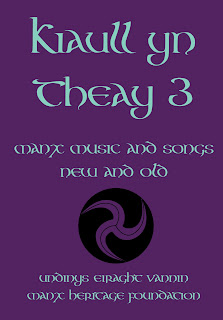 I know from being at the Potomac Celtic Festival at the weekend that there’s a HUGE demand for Manx music in an accessible format. I was set upon by a harpist  pleading for music! This will be a great addition.

‘Kiaull yn Theay 3’ is an extension of a series of music books initiated by the late Colin Jerry in his quest to make Manx music more readily available to a wider audience. Books 1 and 2 remain very popular with local musicians, and although published many years ago can still be bought from local retailers and websites.

Published by the Manx Heritage Foundation, book 3 aims to continue Colin’s model in light of the growing interest in Manx music. Designed to slip easily into a fiddle case, or indeed any other instrument carrier, this compact volume sporting an easily recognisable purple jacket, comprises both newly composed material and revised traditional pieces. But such is the wealth of new tunes within the Island’s traditional music scene that a fourth volume is already under way.

Launched at a special evening of new music in dedication to the late Colin Jerry, Breesha Maddrell (We love Breesha! Ed.) of the Manx Heritage Foundation said, “The book is testament to the creativity and skill of the Manx music community today. Dedicating the book to Colin’s memory was an important way of paying tribute to someone who had encouraged so many musicians and singers both directly and indirectly”.