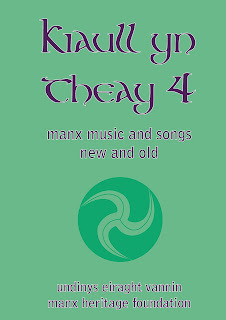 Renewed interest in Manx music has prompted the latest release of this handy-sized publication, which continues the series of books which were the brainchild of the late Colin Jerry.
Songs included in this volume continue to reflect his ethos that the songs should speak for themselves, without translation, or explanation. But for those who do not have Manx Gaelic helpful pronunciation guides will soon be available at www.manxmusic.comtogether with audio files for those who prefer to learn by ear.
Concentrating largely on material from the 1970s up to the present day, the extension of the Kiaull yn Theay series was developed from workshops held during the annual Manx and Inter-Gaelic festival ‘Feailley Ghaelgagh’, since renamed ‘Cooish’.
Published in conjunction with the Manx Heritage Foundation some of its content is drawn from tunes heard on CDs, or during gigs, rather than sessions, providing a cross-section of new and old material. With contributions from all parts of the Island, many of them from young people bursting with creativity, the naming of tunes reflects episodes from modern life and external influences.
Far from being an ostentatious little number, its fresh, green cover and simple design concentrates the mind on the more important aspects of the book – the tunes!
Collated by Breesha Maddrell, she has also included brief biographies of each contributor and a little detail about the songs.
Further books in this series will likely be published over time with musicians invited to share their material by contacting Breesha Maddrell at the Manx Heritage Foundation.
www.manxmusic.com
www.manxheritage.org
Valerie Caine © October 2011
(Courtesy of Manx Tails)