Despite an array of contemporary entertainment, the annual Oie’ll Verree in Kirk Michael still attracts a full house to the Ebenezer Hall, situated in the centre of the village.

Many, but not all, of these concerts have fallen by the wayside in recent years, although this particular event continues to grow in popularity. Now organised by members of Michael Heritage Trust, the evening follows a tried and tested format which draws people from all walks of life; and indeed from various parts of the Island.

The lynchpin of this year’s event was southern based farmer, Paul Costain, who skilfully introduced each performance with cheerful alacrity and a few quips of his own – ably supported by accompanist Marilyn Cannell.
The first part of the concert followed a typical pattern, with entertainment provided by Manx Gaelic choir Caarjyn Cooidjagh, traditional dancing by Louise and Matt Callister, an interlude of magic from Juan Moore and a selection of local recitation from Pam Evans and Rebecca Traynor.

But it’s the Manx dialect play which attracts the most attention.
This year Matt and Juan Callister brought something new to the Manx stage, before everyone settled down for the main feature; A Cat and Dog Life by the late Kathleen Faragher. Its two characters, Betsy Quaggan and Kirry Taggart, were played admirably by Marilyn and Chrissie Cannell.

There’s been a resurgence of interest in the local dialect poet, Kathleen Faragher, who was born in Ramsey in 1904, and went on to become a popular writer and performer. She was a prolific writer of books, poetry and short stories, acknowledged as one of the most important dialect poets on the Isle of Man.
After her death in 1974, she was buried in a family grave at Kirk Maughold, but lately it was realised that her gravestone needed some attention, which was carried out by Gregg Memorials and funded by Culture Vannin. 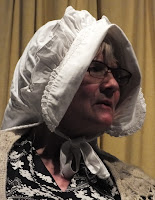 A project dedicated to recording memories of Kathleen Faragher is currently underway with Culture Vannin. If you have any memories you would be willing to share, contact the project organiser, James Franklin, at manxliterature@gmail.com, or c/o Culture Vannin, P O Box 1986, Douglas, Isle of Man, IM99 1SR.