Knox Work to be Auctioned at Mallams 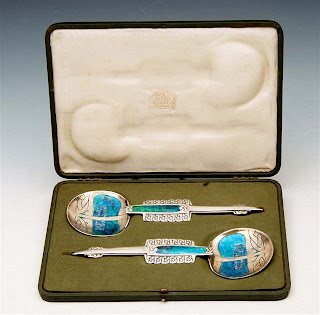 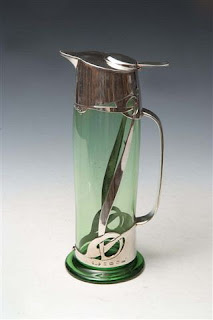 As Liam O’Neill, founder of the Archibald Knox Society, continues in his quest to bring the work of the Manx designer and artist to a greater audience, further examples of Knox artwork will come up for auction during December.
The Oxford based auctioneers will be selling a selection of pieces under the heading of ‘20th Century Decorative Arts and Design and British Studio Pottery’ including two significant pieces by Knox.
Mallams (established in 1788) is recognised as one of the leading specialist provincial auctioneers and estate agents in the British Isles, and will feature some distinctive designs from the Island’s leading designer from the turn of the nineteenth century.
One of the items will be a Cymric flagon designed whilst Knox was working for Liberty & Co and owned by John James Ferguson, proprietor of a Clyde shipbuilders’ yard circa 1900. Later inherited by others members of the family, it’s estimated to fetch £6,000 – £9,000.
Also scheduled for sale is a pair of Cymric silver and enamel commemorative spoons, again designed whilst working for Liberty & Co. Made in celebration of the coronation of Edward VII, the broad bowls are embellished with entrelacs and the insignia ‘Anno Coron – E.R. VII’ against a coloured enamelled background, and come complete with their original fitted case from Liberty & Co. Estimated selling price for this particular item is £5,000 – £8,000.
For further information about the work of Archibald Knox please visit the Archibald Knox Society website.
www.archibaldknox.com
Valerie Caine © December 2011
(Photos courtesy of Mallams)