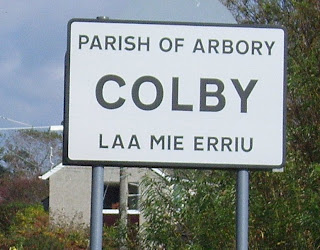 Manx Mum asked me to step in while she’s on vacation with a few Manx lessons and blog posts on Manx language and culture. I thought we’d begin with a few basic greetings to help get you started.

I just gave you the first – moghrey mie. Moghrey is morning and mie is good, so we can see that in Manx adjectives such as good, bad, happy, sad come after the noun, not before it.

Notice how mie changed to vie after oie. That’s because oie (night) is a feminine noun, and feminine nouns can change the initial sound of an adjective that follows them. M and B become V in such cases. Hence, after oie, mie becomes vie. Oy vey.

How to pronounce Manx? I could spell it out, but why take my word for it? Go to Ynsee Gaelg at www.learnmanx.com to hear spoken Manx and take free online Manx lessons.

There’s an incredible amount of information and Manx learning material available on the Web — something we didn’t have when I first became interested in Manx.

It doesn’t matter now if you’re in Douglas or Des Moines or Dahomey, you can hear spoken Manx online, a great help in learning pronunciation.

I’ll be back later with more on the language and additional Web sites for you to explore.