Kelly McCarthy Posted on July 17, 2011 Posted in Uncategorized
A message from the President of the World Manx Association 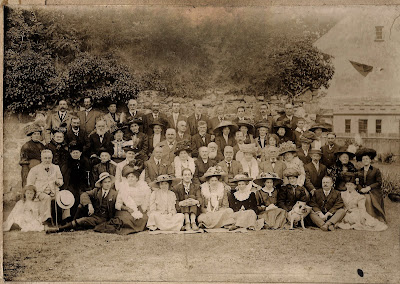 Today is 17th July and it was exactly one hundred years ago that Richard Cain held a meeting at Rushen Abbey with fellow Manxmen from the Isle of Man, the United States of America, Canada, South Africa, Australia and different parts of England. The event was captured by Thomas Keig the photographer for this was the birth of The World Manx Association. The object was to form an umbrella group to unite all those Manx Societies across the world and together act as a conduit for those Manxmen who decide to make a new life in the developing counties of the world by helping them to find a home and a job. The other main object was taken from T.E.Brown’s last public lecture on the Island and words that he said that had been engraved on Richard Cain’s heart for the following fourteen years:

” Whenever any of our sons and daughters revisit the Island be sure to give them a real welcome, and on their returning give them a hearty shake of the hand and a clap on the shoulders, so that they may return with renewed hope and courage to the land of their adoption.”

I take this opportunity to extend greetings to all Manx people around the world and to thank the Manx Societies for all that they do, I pray they continue for generations to come.

On behalf of the Luxembourg Manx Society I congratulate the World Manx Association on the centenary of its first meeting, this day in 1911.

It was wonderful to be part of the celebrations and thank you for extending such a warm welcome to my son, Charlton, and myself. Hopefully Charlton will be an active member of the Manx community in the years to come.

Best wishes to the WMA for the next 100 years!