I have lifted the entire write-up — down to the peep-toe shoes — from today’s IOMToday: You’ll notice an honored guest from America, a Native-American chief who is in discussion with the island on a number of business matters. Apparently being an independent nation located in the middle of a larger one struck a chord with the Seminoles! 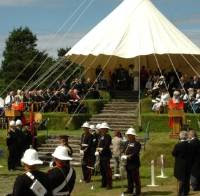 It was a day of firsts and lasts for some taking part in the ceremony.

It was a family affair for Malew and Santon MHK Graham Cregeen whose brother Stephen joined him on Tynwald Hill for the first time as chief registrar.

Meanwhile, it was the last Tynwald Day for Lieutenant Governor Sir Paul Haddacks, who retires next April.

There was a range of guests, from former MP Andrew Mackinlay, who helped save the Island’s reciprocal health agreement to Richard Bowers, an alligator wrestler and president of the native Indian Seminole Tribe of Florida.

Following a service in the Royal Chapel, which was broadcast live on a big screen, the procession of Tynwald members, captains of the parishes, members of the judiciary and dignitaries made their way to Tynwald Hill. Second Deemster Doyle carried out the duties of First Deemster Kerruish on Tynwald Hill. He was unable to attend due to long-term illness.

The 10 new acts passed during the last 18 months by Tynwald were promulgated in English and Manx, and a number of petitions for redress of grievance were presented by members of the public.

After the captioning of the acts, Douglas resident Dr Brian Stowell received the Tynwald Honour for his contribution to Manx life. Dr Stowell is regarded as a father figure of the Manx language and is a member of the Celtic Congress.

Among the official guests, the unofficial contest for the best colour co-ordinated outfit was won by Peel MHK Tim Crookall’s wife Carol. Her black and red spotty dress was perfectly matched with black gloves and a red fascinator, bag and peep toe shoes.

Meanwhile, compared with some of the other guests, Treasury Minister Anne Craine looked quite somber in a black skirt suit and white and black hat. As the woman in charge of the Island’s money, it was probably a wise move to choose to be in black rather than red.

The Tynwald fair was bigger than ever with visitors enjoying a wide range of stalls and entertainment. Following the ceremony, several traditional Manx dancers joined together for the Grand Manx Dance and a MusicFest, with 16 acts, celebrated the Island’s musical talent.

National Day festivities traditionally end with a fireworks display. That was cancelled this year, understood to be because of budgetary constraints. This year it was due to end with a performance by the Ellan Vannin Pipe Band performing floodlit on the hill.