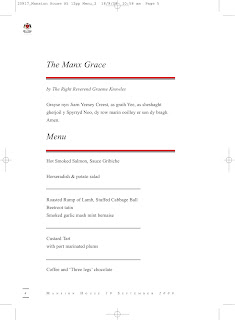 Hot news from London. Last night (19th) the Manx government hosted a dinner at Mansion House (the Lord Mayor of the City of London’s establishment) to celebrate the high regard in which the City holds the Isle of Man as a financial center and to celebrate the close ties between the City and the Isle of Man. It was a big do, the Chief Minister, James Anthony (Tony) Brown was there as well as Treasury Minister, Allan Bell, Alex Downie, Minister for Space and a Treasury Minister, Martin Quayle, Tourism Minister, Phil Gawne — who gave the Manx Toast, and many others including the top civil servants from External Affairs and many Departments.

The Lord Mayor isn’t the same as the Mayor of London. This one is responsible for the City within a city, the Square Mile, which encompasses the heart of the financial world. The current Lord Mayor is the Rt. Hon. The Lord Mayor, Alderman David Lewis.

The Manx Grace goes like this: Shoh slaynt as shee, as eash dy vea, as manynrys son dy bragh. (Here’s health and peace, a long life, and happiness forever.)