Launch of Brian Stowell’s Autobiography – Gaelg as Fishig:Skeeal my Vea 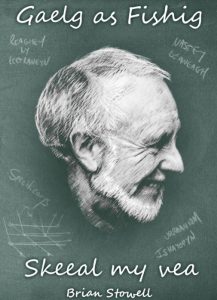 An informal get-together recently at Culture Vannin in St John’s marked the official launch of Brian Stowell’s autobiography amongst family and friends.

Respected by many, Brian Stowell worked tirelessly and enthusiastically for both the Manx language and the Island’s cultural identity, which is represented in this recently published volume.

Born and educated in Douglas, he worked as a lecturer in physics at Liverpool’s John Moores University, before returning to the Isle of Man in 1991 when he took on the new position of Manx Language Officer with the Department of Education.

He was awarded the Reih Bleeaney Vanannan in 2008, followed by the Tynwald Honour Medal two years later for his dedicated work with the language.

Written appropriately in the Island’s native tongue, the book takes the reader on a singular journey, which includes both his cultural and political awakening, with the title reflecting two prominent aspects of his life – physics and the Manx language.

The current Manx Language Officer, Adrian Cain said, “He is sadly missed, but fondly remembered by many people both here and abroad – with this book a testament to a life well lived.”

Gaelg as Fishig:Skeeal my Vea is available from Culture Vannin and bookshops across the Island priced at £12.