Laurence runs for the Keys 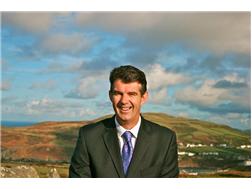 Our own Laurence Skelly is running for office on the island.
As a Past President of NAMA and organizer of the San Diego Convention as well the man behind the exceptional Manx Inspirations company I’m sure he’ll do well. Good luck in September, Laurence. We’ll follow you here!

BUSINESSMAN Laurence Skelly has announced he will stand as an independent candidate for the constituency of Rushen in September’s House of Keys general election.

Manxman Laurence, 49, runs wholesale business Manx Inspirations with his wife, Jackie, and is a partner in event management company Destination Isle of Man. The father-of-two has been heavily involved in the Rushen community since returning to the Island 12 years ago. He’d previously lived in the US for 15 years, where he ran a travel business in California.

Focusing his campaign on the key issues of the economy, housing, equal care for the elderly and more facilities and opportunities for young people, Laurence believes his business acumen and work within the community – coupled with a deep national pride –will stand him in good stead should he be successful come polling day.

He said: “I’m standing because I believe Rushen needs better representation, and the Island’s interests must be protected more robustly and promoted more effectively.

“There has been much criticism of government’s performance in the last few years, looking at the collapse of Kaupthing Singer & Friedlander IOM, the reciprocal health fiasco with the UK, the VAT issue and so on – and the election is the time for the public to use their vote to bring about change, if that is what they want.”

During his time in California Laurence served as official representative for Isle of Man Tourism in North America for five years and was a board member on the British American Chamber of Commerce in California for three years.

He was heavily involved in the North American Manx Association, serving a two-year term as president.

He added: “I’ve always been passionate about the Island’s wellbeing and political position.

“Since returning home, our family has found an incredibly strong sense of community and pride in Rushen and it would be an honour to serve the people of the sheading in the House of Keys and Tynwald.

“My community involvement in recent years has allowed me to speak at length to many people, listening to what they want, for both Rushen and the Isle of Man.

“I’ve based my manifesto on my findings, as I believe that in order to serve the people, you must first listen to the people.”

Among Laurence’s campaigning issues within Rushen are the development of a Marine and Heritage Centre for Port St Mary, the strengthening of Port Erin as a tourist destination and retail centre, improving efficiencies by decentralising services from central government to local authorities and development of housing and recreational facilities at Ballakilley.

He said: “It is important that we maintain a truly balanced society by caring for those less fortunate, providing for the elderly and investing in youth.

“I believe this to be the Manx way of life. And if it’s not, then it should be.

“I’m confident that I have the business experience and creative intelligence needed to help guide the Island through these difficult economic times.

“There are more tough decisions to be made. But with a clear vision and a strong social conscience, we can look to the future with a positive attitude.”

Laurence’s full manifesto can be found at www.voteskelly.com