Leyland Era Draws to a Close 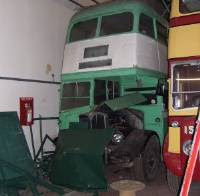 The last of a long line of buses from the famous British manufacturer Leyland Motors will soon leave use on regular service journeys with the Island’s ‘Bus Vannin’ fleet, with the exception of a limited number of school services. This will also end the use of step-entry buses on the Island’s regular service journeys.
Leyland has been a familiar name in the Island’s bus fleets since 1927 when a Leyland C7 was delivered new to Manxland Bus Services but now only a handful of more recent models remain in use.
Commemorative services with the last survivors of the type, numbers 83 (BMN 83G) and 99 (DMN 16R), will operate as part of the Manx Transport Heritage Festival which is taking place between 30th July and 5th August. Both buses will then be placed on loan to the new Jurby Transport Museum where they will join the display of vintage buses and other vehicles.
Number 83 is one of a batch of six Leyland bodied Olympians purchased new in 1988. These were the first new double deck buses to be used on the Island since A.E.C. Regent V numbers 409/410 LMN were delivered to Douglas Corporation 20 years before. 410 LMN was the last A.E.C. double deck chassis built and is still owned by ‘Bus Vannin’.
Number 99 is a former Dublin Bus Alexander bodied Olympian and is the last of a considerable number of second hand Leylands (Titans, Leopards, Panthers, Atlanteans and Olympians) purchased between 1972 and 2003. Second hand buses have featured on the Island since 1927 with other notable purchases being Dennis Falcon single deck buses in 1967 and Dennis Dominator double deck buses in 1993.
I was given an Atlantean while down the pub (The Albert) one night. Weirdest thing to ever happen in a pub in a life of weird pub events.