Local Charity Needs Your Help with the Homeless this Winter

Although the Island is often viewed as a place of wealth and prosperity, there’s a growing number of people acutely affected by the high cost of living, whilst others find themselves homeless.

These issues are unrecognised by some living on the Isle of Man, but volunteers at the forefront of the charity Graih witness at first hand the growing number of homeless individuals, of both sexes, who arrive at their door looking for help and compassion.

Homelessness is rampant across many countries, and the causes in each area broadly similar, although the spectre of economic decline often darkens their lives. The impoverished may not be seen on the Island’s streets, unlike other countries, but that doesn’t mean they don’t exist. It is sometimes said, with little charity or justification, that being homeless is a lifestyle choice, but many of these vulnerable individuals are likely to face an early death, or at best an unstable existence.

Graih (the Manx word for love and pronounced ‘gry’) was established in 2008 with its roots within a Christian group known as the Stauros Foundation, which offered a drop-in centre to support those with addiction. It soon became apparent, however, that homelessness was a key component of their problems – often sleeping on the streets, in derelict houses, car parks and public toilets. There was little they could offer at this point, but it was gratefully received by those who needed somewhere safe and warm to sleep. By the following winter it was obvious that there was a greater need for such a service, with the realisation that this had become a serious problem.

With greater awareness, an extended group of volunteers and supporters allowed the enterprise to expand, providing hot food, a shower, clothing (if required), a place to chat and a sofa to use overnight. Additionally, there is now an emergency night shelter.

In the intervening years Graih has fostered partnerships with government agencies as well as other charities and churches; providing security and re-assurance in an increasingly unstable world. 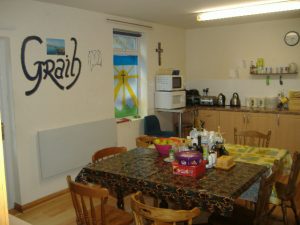 Based at The Alpha Centre in Douglas, Graih also offers a varied programme of events throughout the year, providing important social and pastoral support, and community work where applicable.

A capitalist society is often embarrassed by its homeless, with each country offering differing solutions, and many would argue that governments need to be better employed to prevent this growing issue. In the meantime Graih continues to step up to the plate in order to assist some of the most vulnerable in our society, including a high proportion of guests suffering with mental health problems, as well as others afflicted with substance abuse and addiction.

If you can help them, in any way, please contact them now.