Lord of Man goes to the movies 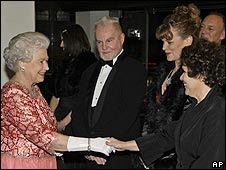 A Bunch of Amateurs was selected for the Royal Film Performance, attended by the Queen and Prince Philip in London.

Cast members Imelda Staunton and Sir Derek Jacobi were there to greet them. The film, which stars Burt Reynolds as a washed-up Hollywood actor, was chosen last month to replace original choice Harry Potter and the Half-Blood Prince. The BBC has a video here.

Actress Imelda Staunton (right) was among the cast members present