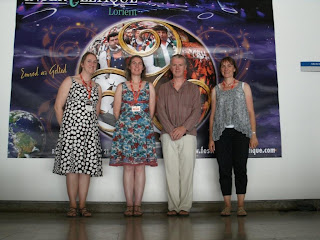 The 40th anniversary of the Festival Interceltique de Lorient in Brittany attracted a record breaking 800,000 people to share ten days of excitement in what is seen as one of the most important Celtic festivals on the calendar.

The Isle of Man was represented by the Mollag Band who shared the stage with a host of internationally renowned musicians and dancers from the Celtic world.

Punchy, upbeat, but equally challenging the Mollag Band regaled their audiences with a range of original songs and innovative tunes. This secured a warm reception from the crowds at Lorient where members of the band were equally at ease on stage in front of a packed theatre audience, or playing to relaxed passers by at the popular Manx Pavilion. Performing at a range of venues including the prestigious Palais de Congres, Ploemeur and Lorient Town Hall, members of the band used the opportunity to liaise with hundreds of press representatives promoting the music, language and culture of the Isle of Man.

Thanks to the festival’s Director, his team and the sterling work done by the Manx Heritage Foundation the Manx presence at Festival Interceltique de Lorient has strengthened in recent years, but work on next year’s festival is already underway.

Official Delegate to the festival from the Isle of Man, Aalish Maddrell, has already set the process in motion to select performers for next year’s festival under the banner of ‘Year of the Celtic Diaspora’. Applicants will need to be confident, accomplished musicians, who can perform traditional and/or original music in the Manx style at the festival which takes place 5th – 14th August, 2011.