Made in the Isle of Man 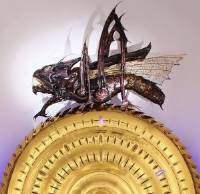 THE WORLD’S largest grasshopper escapement played its tricks on the audience as the new Corpus Clock was unveiled by Professor Stephen Hawking at Cambridge University on Friday. This fabulous creation was designed by Island resident, inventor, horologist and one time chairman of Strix Ltd in Castletown, Dr John Taylor. The clock has no hands or numerals but indicates the time using blue lights focused through different slits in the face. The lights, controlled by the escape wheel, move in concentric circles pausing to indicate the hour, minute and second. The clock strikes the hour with the sound of a chain dropping into a coffin to symbolise mortality. It also plays tricks with the observer, creating the illusion of pausing, running unevenly and even going backwards. All this is done mechanically rather than by computer. The design was inspired by the early English clockmaker John Harrison who invented the so-called ‘grasshopper escapement’ mechanism which is usually hidden inside the clock itself. (Harrison was also responsible for creating the chronometer that made accurate longitude sightings possible through its accuracy and portability.)