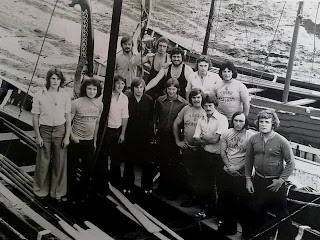 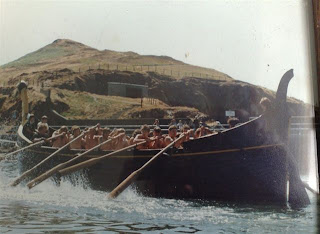 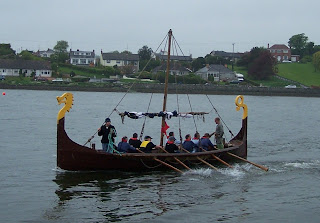 Later this month a horde of fairly amiable Vikings will be leaving Manx shores and heading to the picturesque banks of Strangford Lough to take part in the seventh annual Viking Boat Race.

This popular event, held within Killyleagh Bay, forms part of the ‘Magnus Barelegs Viking Festival’ and attracts teams from all around the world, but they face stiff competition from the Manx boys who have proved to be consistent winners. Styling themselves as the ‘Young Vikings Again’ it has been suggested that they could be the oldest continuous rowing team in existence, with a combined age of approximately 550 years!

Billed as the greatest Viking Festival in Ireland organisers have also planned a number of School Education Days, and an exciting finale that includes a Viking Living History display, mass invasion and inevitable battle.

Held in the fishing port of Killyleagh and within the grounds of the scenic Delamont Country Park in County Down, the celebrated Viking King Magnus Barelegs is buried just a few miles from the site of the festival.

Killyleagh is also associated with an illustrious Egyptologist, a famous England and Northern Ireland footballer and is the birthplace of the man who introduced drinking chocolate to Europe.

But the twelfth century Killyleagh Castle, which dominates the village with its striking Loire style architecture, may also have an historical connection with the Isle of Man. One of the Manx team, Roy Baker, believes that the eye-catching Killyleagh Castle may have been built as a wedding present for Auffrica, the daughter of Godred the Black, King of Mann and the Isles. The latter day Manx Vikings have become firm friends of the present owners Gawn and Polly Rowan-Hamilton and their family, in a castle which once played an important part in Ulster Scots history and still retains its own fearful dungeon. Reputed to be the oldest inhabited castle in Ireland and considering its majestic, almost fairy tale like appearance it’s not too bad for a temporary B & B!

Links with the area have also been forged over a pint of Guinness at the ‘Dufferin Arms’ where the landlord has adopted the Manx team and shown extensive generosity. An ideal place to slake their thirst after a hard day’s rowing, this Irish hostelry displays the Manx national flag and has now become their unofficial headquarters, where critical discussions can be overheard about rowing techniques and the standard of the beer.

This is also an important opportunity to attract media attention, with the town of Killyleagh coming alive with visitors as the area rediscovers itself with the lapse of traditional industries. But it’s also a perfect occasion to raise money for a selection of good causes in the area and beyond, with local support a vital component. All money raised by running the event will be put towards the area’s cross community work through the Killyleagh Social Partnership, but each team is invited to raise funds for their chosen charity, or contribute to locally based charities in the town.

PS Black and white photo is today’s rowers in their youth….!