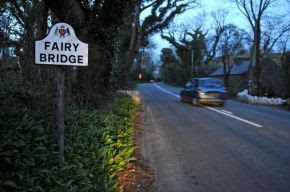 The Isle of Man government is planning to set up new letter boxes, exclusively for sending mail to fairies.

The tiny island, which is steeped in folklore, is famous for its “Fairy Bridge” – said to be the home of fairies – and locals believe it is unlucky not to say hello to the fairies when crossing the bridge.

But Manx government minister David Callister said letters, ribbons and other memorabilia left on Fairy Bridge for the “Little People” had become a dangerous distraction to motorists.

The idea of a letterbox was suggested by Linda Williams, who runs The Fairy Shop in Douglas, the island’s largest town.

Mrs Williams said that tourists and locals visiting the Fairy Bridge risked being mown down by passing cars on the narrow road, which like much of the island has no speed restrictions. And she said that the hordes of letters, ribbons and tokens left hanging from the bridge and surrounding trees had become a deadly hazard to passing drivers.

“The Fairy Bridge is a wonderful tradition, and one of the Isle of Man’s best known folk tales, but the volume of momentos left by visitors is becoming a concern,” said Mrs Williams.

“There are hundreds of letters, tokens, I’ve even seen bras left on the trees! Something needed to be done before someone was hurt trying to pin tokens to the bridge, so I suggested to the tourist board that a post box in a safe place could be a better idea.

“I’ve offered to respond to every letter if they put in the post box there. This is a simple, light-hearted solution, which will allow people to continue enjoying the fairy tradition.” Here