Kelly McCarthy Posted on April 27, 2012 Posted in Uncategorized
Flag-waving pupils at Manor Park School give a Manx welcome truly fit for a Prince.
Prince Charles and Camilla, Duchess of Cornwall, braved unseasonably torrential rain during their visit to the island yesterday (Thursday) as part of the Queen’s Diamond Jubilee tour to mark the 60th anniversary of Her Majesty’s accession.
In the morning, the Prince of Wales and Camilla visited the National Sports Centre, where they watched young people taking part in an outdoor cycle race, before meeting World Champion cyclist Peter Kennaugh and members of the Team Royal London 360 Isle of Man Cycling Club. 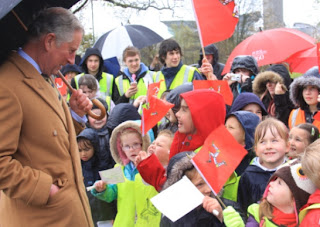 Their Royal Highnesses then headed to Peel, where they saw the replica Viking longship ‘Vital Spark’ and officially launched the redevelopment of the Isle of Man Food Park. IOMToday