Dear Manxies across and abroad,
My name is Adrian Bailey, an island resident, and I have written a children’s book, Otherworld – The Isle of Mist, to raise money for Rebecca House, the Isle of Man Children’s hospice.
My book is being launched on Sunday the 27th of November at the Hospice Christmas Fair where I will also be attempting to break the Guinness World Record for the largest book signing. This is to gain as much publicity for the book as possible because in addition to paying for five thousand copies to be specially printed for sale on the Isle of Man (so all the money raised can be given to Rebecca House), all my royalties from UK sales, and all the publisher’s net profits, are to be donated as well. As you can imagine I need as much support for my book as I can get and I am asking if you can help. 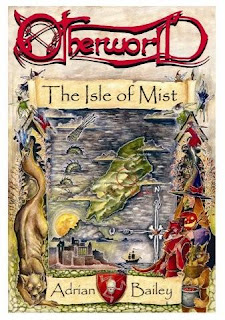 Otherworld is a fantasy story, based on a fictitious version of the Isle of Man called the Isle of Mist, and is heavily influenced by Manx history, folklore and traditions.

It tells the story of Wally Gobbett, a fifteen year-old apprentice conservator who unearths a forgotten medieval manuscript, The Secret Chronicle of the Isle of Mist, hidden in the basement of the British Library in London. This Secret Chronicle exposes another side to the Isle’s history – a story of magic, witches, fairies and giants that the monk, Brother Brian the Blessed, wasn’t permitted record in the real chronicle.
Pursued by the agents of a sinister organisation known as ‘The Order’, who want the Secret Chronicle for themselves, Wally is forced to flee to the mysterious Isle of Mist where he discovers a secret community of witches and wizards, ruled over by the powerful sorcerer – Manannan Mac Lir.
With the help of an unlikely group of friends, Wally then has to battle dragons, vicious hobgoblins and the agents of The Order as he tries to solve the riddle of the Secret Chronicle and aid the sorcerer Manannan in his quest to vanquish the evil that threatens to destroy the place where the power of magic comes from – the Otherworld.
Otherworld is aimed at children aged ten and upwards but was essentially written to be read by adults as well. I am hoping that anyone, from ten to one hundred will enjoy it and help to make it a success. As Sir Walter Scott said;
‘Tales of Goblins, Ghosts and Spectres; legends of Saints and Demons, of Fairies and familiar Spirits, in no other corner of the British Isles are told and received with more absolute credulity than in the Isle of Man.’
Otherworld is being published  by a local company – MP Publishing – and is available on e-book, Amazon Kindle and in print from Amazon.com.
Unfortunately no money from books bought outside the UK will go to Rebecca House, the publisher has to made their money back somewhere, but it is vital that the book sells abroad to create interest at home. This is where you Manxies across and abroad come in.
I would be hugely grateful I you would consider buying a copy of my book, in any format, and forward this e-mail on to your members, friends and family. If the book takes off in the US and elsewhere it will start selling in the UK and then we will raise more money for Rebecca House.
Thank you for your help

Adrian Bailey
PS –  You can contact me at adib@manx.net or through Maria Smith at MP Publishing on 044 1624 618672.
PPS – half of the five thousand books for sale on the IOM are special edition hardbacks that will be sold nowhere else. If you want a copy as a Christmas present or as an investment in case Otherworld becomes the next Harry Potter, please ask someone to buy you a copy and get me to sign it as part of the world record. Cheers