Manannan’s Choice of the Year Awarded to Phil Kelly 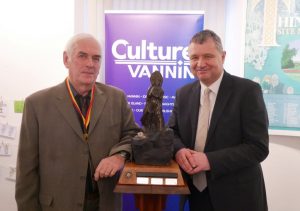 This year’s Reih Bleeaney Vanannan (Manannan’s Choice of the Year) has been awarded by Culture Vannin to local man Phil Kelly, recognising almost fifty years of work in teaching, promoting, publishing and developing online resources for the Manx language by one of the cultural community’s most unassuming leaders.

His long held enthusiasm for, and dedication to the language, which he discovered as a student, provided a vital contribution to the survival and development of Manx Gaelic. He is a founder member of Banglane Twoaie, the Northern branch of Yn Cheshaght Ghailckagh (the Manx Language Society) and also helped record Manx speakers during the 1970s.

As a teacher Phil played a significant role in the success of the Manx language which is still relevant and became the second Manx Language Officer for the Department of Education, producing many valuable resources. Additionally, Phil also produced learning material for beginners, organising and participating in evening classes for all ages at Michael Football Clubroom in the 1990s. He also visited and supported many Oieghyn Ghaelgagh (Manx-speaking evenings) and conversational classes around the Island.

His publications include Fockleyr Gaelg-Baarle, A Guide to Mann’s Placenames and Manx Usage, but he was also instrumental in re-printing many short stories in the Manx language during the 1970s, with kind permission of the authors.

He was always keen to see how technology could be adapted for language learning, and his pioneering work with material online, or in conjunction with apps, has made its mark. Phil’s creation of an online dictionary allowed free and greater access to Manx vocabulary, but his Manx Bible site, (developed with Ffynlo Craine), makes one of the most important texts in the Manx language accessible and searchable at the touch of a button http://bible.learnmanx.com/ His dedicated website (which is no longer active) also gathered together learning resources which had never been available online before.

Described as ‘an unsung hero of the success story of the Manx language’, this year’s award to Phil Kelly has been recognised as a deserving and fitting recognition of the work and dedication that he has placed into the development of the Manx language during the last half a century.

A spokesperson for the Reih Bleeaney Vanannan selection panel, comprising representatives of Culture Vannin, the Isle of Man Arts Council, Manx National Heritage Trustees, Yn Cheshaght Ghailckagh and Yn Chruinnaght, commented, “His pioneering attitude to the use of technology to help produce and share resources for the language was exemplary. By publishing and teaching, he has left a rich archive and an important legacy for future generations.”

The Reih Bleeaney Vanannan trophy was awarded to Phil Kelly at a private ceremony at Culture Vannin’s headquarters in St John’s, where he nominated the Manx education charity Mooinjer Veggey to receive a cheque for £500. Mooinjer Veggey runs nurseries using the Manx language at Braddan and Ballasalla, Possan Cloie (parents and tots) and the Manx language primary school based in St John’s – Bunscoill Ghaelgagh.