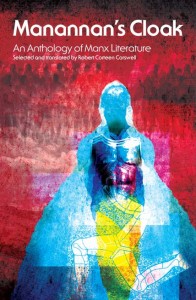 Manannan’s Cloak brings together a range of texts in the Gaelic language of the Isle of Man from the earliest writings to the present day, along with their English translations. Written Manx arrived comparatively late, and the size of the Island’s population was not conducive to the widespread development of Manx literature.
Nevertheless, the amount of Manx literature collected here may come as a surprise. The texts in Manx are linked by a narrative which places them in the context of Manx history, and includes observations about the language and the people who used it by a number of officials and visitors to the Island, like George Borrow.
In recent years there has been a positive attitude to the language which has led to the development of a modern literature in which books are produced professionally to meet a growing demand.
The book has been edited by Manx speaker, broadcaster, musician and author Robert Corteen Carswell and produced with the financial assistance of the Manx Heritage Foundation.
An important book for anyone interested in the Isle of Man, its people and language.

Manannan’s Cloak is the second volume of Francis Boutle’s Lesser Used Languages of Europe series, which includes anthologies of literature in Breton and Galician. In preparation are anthologies in Basque, Scottish Gaelic, the Norman language of the Channel Islands, Esperanto and Occitan.

Visit www.francisboutle.co.uk for a list of their books in print.