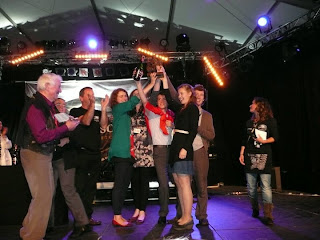 Manx Band ‘Nish as Rish’ proved they were the best when they walked away from this year’s ‘Festival Interceltique de Lorient’ with the prestigious Trophée Loïc Raison. Given annually to the best new folk group at the festival, ‘Nish as Rish’ performed alongside other groups from Ireland, Brittany and Asturias in the final which was reported to have been the fiercest competition for 20 years. The band was presented with a cast bronze trophy, featuring a trio of folk musicians, and prize money totalling €1200.
Singer and flautist, Ruth Keggin, said, “I was so proud to be able to represent the Island this year in Lorient – for us to win the trophy on top of that was a dream come true. The support we had from the audience was just fantastic and it was lovely to see the three legs being flown so proudly by so many people. It’s a real achievement for the Island and for Manx music to have won twice in four years”. Local band ‘King Chiaullee’ won the trophy in 2008.
Music graduates from the University of York, members of ‘Nish as Rish’ perform both traditional and original music. Acclaimed for their sensitive and bold arrangements and their infectious stage rapport, the group performed alongside a number of top class acts and were singled out to perform live for local and national radio. 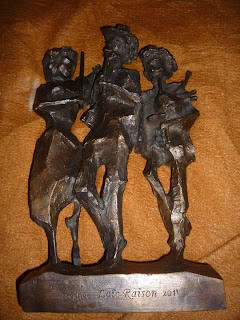 Official delegate to the festival, Aalish Maddrell, commented, “I’m delighted that ‘Nish as Rish’ did so well this year – the crowds and committee of the festival totally fell in love with them. They quickly sold out of CDs and they developed a strong following. At a festival which attracts over 800,000 visitors over 10 days this is no mean feat!”
‘Nish as Rish’ recorded their debut album on the Isle of Man earlier this year which is currently available through the following outlets:-
nishasrish@manx.net
www.manxmusic.com
Manx National Heritage Shops
Valerie Caine
© August 2011