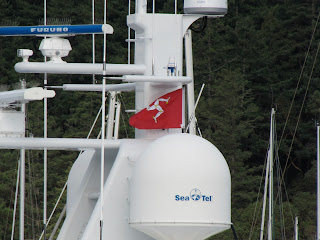 In spite of many countries having budget troubles, the Isle of Man’s economy expanded
3% in 2012 and is slated to improve even more so in 2013.  The Isle of Man is experiencing
a strong, growing economy.  The Aircraft Registry is now the fastest growing offshore
register in the world and the Shipping Registry also saw huge growth in 2010 and 2011.

Here are two pictures of the yacht “After Eight” which was sighted docked in Friday Harbor, San Juan Islands, State of Washington on October 25, 2012. As you can see, it is flying a  Manx flag, although it isn’t the Red Ensign specifically designed for Manx-registered vessels. (see below)

The Crown dependency of the Isle of Man was granted a red ensign, with the three legs of Man in the central fly, for use by ships registered through the island, by Royal Warrant dated 27 August 1971. It is widely used on luxury yachts and largecargo ships around the world, due to the financial benefits the Isle of Man can provide. 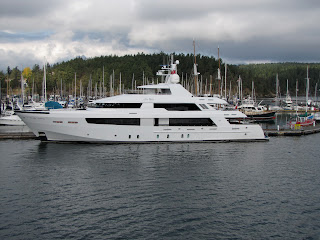 “After Eight” is owned by a Canadian family and checking online I believe it is for sale if anyone is interested. J. Morey. President, NAMA