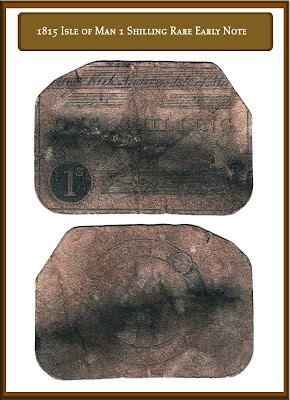 As part of my collection of Manx paper money, I (Brad Prendergast) recently bought an 1815 note that was issued by John Bowstead of Kirk Andrews.  This was from a currency dealer in Canada.  The photo is enlarged.  The actual note is only 2.25″ x 1.5″.  These were known as “card money”, and are among the earliest paper money issued on the IOM.  According to the Quarmby book on IOM paper money, there are 50-100 of these in the world!  I think that part of the reason that so few of these survive is that no on would put one away for a later date, unless the issuer went bankrupt. Otherwise, you would redeem it for the money.  I don’t know how much a shilling bought in 1815, but I assume it was substantial, so it would not be something you would merely put in a drawer and forget about. The next Chicago meeting is at the home of John and Mary Prendergast, 10251 S. Bell Avenue, Chicago. It will take place on Sunday, October 21, 2012, at 1PM.  All are welcome.The next Wisconsin meeting is on Sunday, October 7.  I don’t have the address for the meeting.