Manx Christmas – Past and Present 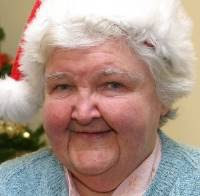 Click on the photo to go to the IOMToday.com page that shares Christmas stories from old and young, including a video of Vera Nuttall here singing “Silent Night”. It is a part of the Tell Me project. In its first year, the innovative Tell Me project has published nearly 60 interviews undertaken by Manx primary and secondary pupils which record the memories of the Island’s over-60s.
The project is sponsored by H&S Davidson Trust and AXA Isle of Man in partnership with Age Concern Isle of Man and the Department of Education, with the support of Manx National Heritage, Manx Telecom, Manx Radio and the Isle of Man Newspapers. The Tell Me 2008 book costs £10 and is available from Waterstone’s, The Manx Museum, The Lexicon Bookshop, Age Concern Isle of Man and the Isle of Man Children’s Centre. For more information please visit www.thetellmeproject.com
I think what I find the most telling difference is that the older generation believe in Christmas as a religious festival and the younger folk see it as a social occasion. I have read that Europe is largely a post-Christian society and this record would suggest there is some truth in this. (Although I think the IoM is not quite as far along as the rest of Europe!)