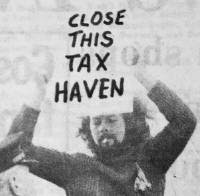 Roger Rawcliffe’s new book “No Man Is An Island” may be a bit of an eye-opener for many as it describes a turbulent period in the Isle of Man’s history.

Mr Rawcliffe, who has years of experience in the Island’s finance sector and is a respected lecturer and historian, was commissioned by the Manx Heritage Foundation to write an account of 50 years of finance in the Isle of Man. Mr Rawcliffe describes the evolution of the Fo Halloo movement which emerged in the 1970s as Manx-born residents came to resent the presence of rich ‘come overs’ who were not here to work but to take advantage of tax benefits.

To those who supported Fo Halloo, which is Manx Gaelic for underground, the abolition of surtax had brought wealth to some but increasingly the Isle of Man was becoming a retirement home to the rich who often bought Island properties as investments. Full – and interesting – story here.

I’m not sure which shocks me most, the sentiment, the hair or the cig!