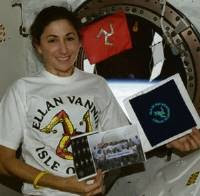 A FILM featuring a video link between a NASA mission and Manx high school pupils opened an international telecommunications summit in Florida. Out of this World – The first Manx Astronaut features astronaut Nicole Stott, married to Manxman Chris Stott, chatting live from the International Space Station to the children in the Manx Museum lecture theatre.

The hour-long link-up was made possible by staff at the Manx Museum, the Department of Education, NASA and Manx Telecom, which provided equipment and expertise to ensure all worked smoothly.

Having seen the footage, executives of Telefónica – Manx Telecom’s parent company – were so impressed that they chose to use it to open their largest customer summit for the bosses of 900 multi-national companies on April 7 in Miami, Florida.  More here.