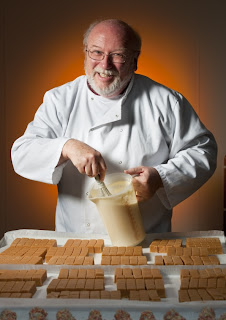 BALLASALLA-based The Original Manx Fudge Factory is the latest business to enter the ‘Manx Food Heroes Awards’, organised by Shoprite in conjunction with the Department of Environment, Food and Agriculture and Isle of Man Newspapers. IOMToday
The family company, run by Peter Birch with his wife Kath and son Owen – when he is back on the Island during breaks from university – produces premium quality fudge, dessert sauces and chocolate on site in their Balthane Industrial Estate factory in Ballasalla.
Peter’s career over the past 40 years reads like a who’s who of the food industry and the chances are you have encountered his work at some point during that period.
If you’re a fan of Jaffa Cakes he happily claims responsibility for creating the ingredient that released the cakes from the conveyor belt.
He’s also worked for leading Dutch food manufacturer Zeelandia and Liverpool-based bakers Sayers.
Closer to home, Peter is known as the man who brought ‘Dinky Donuts’ to the Island in 2004 and former pupils of the Queen Elizabeth II High School in Peel will know him as their food technology teacher between 2001 and 2005.
However, Peter is now hoping that his latest venture will really make his mark in the food world.
Following extensive research, he was confident that he had identified a gap in the market and he began producing premium quality Manx fudge in October, 2009.
The company now has more than 21 varieties including the traditional Butter and Cream and four different Chocfourlate flavours, using the finest Belgian chocolate, as well as the more unusual Sicilian Lemon Meringue Pie, Cherry Bakewell and Bannoffee.
Peter believes that his fudge is the only genuine ‘Manx Fudge’ and he is committed to using only Manx ingredients where possible.
‘Locally-sourced ingredients are really important to us,’ Peter explained. ‘And we use only Manx produced cream and butter in all of our fudge, which helps us to maintain the taste and quality as well as supporting the local economy.’
Peter started his operations by selling to customers in the typical way for a small producer – through the independent stores and by going to the farmers’ markets in Castletown, Ramsey and Douglas – but he has now stepped up his operation and this week his fudge, sauces and chocolates went on sale in Shoprite’s Douglas store.
‘We’ve been in talks with Shoprite for a while and it is a really significant development for our business,’ Peter explained. ‘I was really nervous about going into large stores but the team at Shoprite have helped me with planning and packaging and I’m confident that this will be the start of a long term relationship.’
Fudge isn’t the only product that Peter produces – he is also turning his hand to creating chocolate bars.
However, as you would expect from someone with the extensive knowledge that Peter has gained from more than 40 years of working in the food industry, his chocolate is definitely out of the ordinary.
As well as the slightly exotic ‘ginger’, ‘raisin & wafer’ and ‘mint with caramelised mint leaf’ flavours, he also proudly extols the virtues of his ‘sea salt’, ‘garlic and herb’, ‘rainbow peppercorn’ and ‘chilli’ flavours.

The Original Manx Fudge Factory has already entered the Best Small Business and Best Food Categories in the Manx Foods Heroes Awards while their chocolate is definitely one of the early favourites in the Most Original Product category.

‘The awards are a great way for food and drinks companies on the Isle of Man to get recognition and while you probably wouldn’t have had many entries for this type of competition even 10 years ago, there are now lots of great local enterprises that deserve recognition,’ said Peter.

Entries for the Manx Food Heroes Awards are open until December when a panel of judges, including representatives of Shoprite, The Department of Environment, Food and Agriculture and Isle of Man Newspapers will announce a shortlist for each of the categories with the winners being revealed in January 2011.
For more information on the ‘Manx Food Heroes’ awards, entry forms and terms and conditions visit the respective partner websites at www.manxshoprite.com, www.gov.im/daff/