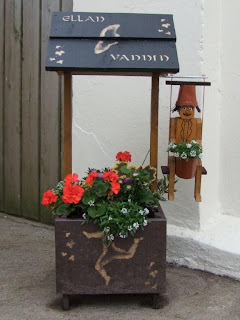 The Manx Heritage Flower Festival has blossomed in recent years with its continued success providing an opportunity for the public to view some stunning floral arrangements within a selection of churches and chapels throughout the Island. An event organised by ‘Churches Together in Mann’ this year the Manx Heritage Flower Festival has reached a significant milestone celebrating its twentieth anniversary.

This year’s theme ‘Rejoice’ is an appropriate choice with some additional venues, such as Ronaldsway Airport, the Sea Terminal and Rushen Abbey, keen to provide new display areas.

Held during Manx National Week many people make an annual pilgrimage to various parts of the Island to see some beautiful displays of floral arrangements created by teams of dedicated volunteers. This is also a good opportunity to tour some of the older or lesser known, churches and chapels liberally scattered across the Manx countryside, and sample some delicious home-made refreshments.

Hosted by twenty one venues in total younger visitors are invited to paint, or draw, an image inspired by the flower festival itself, with prizes sponsored by Tynwald Mills. Meanwhile keen photographers will be asked to capture the spirit of the festival for another competition jointly sponsored by Richard Kinley Photography and Mannin Media.