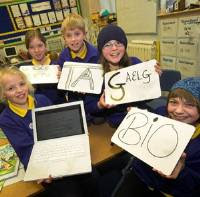 Manx dead? It’s alive and kicking butt in Bunscoill Ghaelgagh where the children have something to say about UNESCO’s premature obituary for the Manx language. See here where five scholars have written to UNESCO, in Manx, inviting it to send representatives to the school to watch them learn and communicate in the Isle of Man’s native tongue.