Manx lamb on sale in Harrods 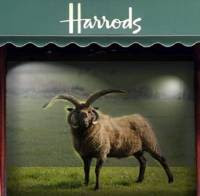 LOAGHTAN lamb is going on sale at Harrods, in London. The iconic Knightsbridge store is launching the Manx product this month as part of a Festival of British Foods.

Chef Valentine Warner, who is fronting the campaign, handpicked Loaghtan lamb after a search to hunt down the finest produce across the British Isles.

George Steriopulos, of the Manx Loaghtan Sheep Breed Society Ltd, said: ‘Harrods Food Halls are world-famous for offering only the finest food and drink, so we are thrilled to be launching there this September.’

Valentine Warner had his own BBC show What To Eat Now and is renowned as a champion of small, British, innovative food producers and seasonal eating

He said: ‘Teaming up with Harrods buyers to pick out some of my favourite producers and bring them to the Food Halls is a great privilege and I hope shoppers will descend on these treats like kingfishers on minnows.

‘Each supplier we are working with has produced something truly delicious and with great love and attention, so people duly need to know about them.’

Bruce Langlands, director of food at Harrods, said: ‘Our Festival of British Foods is all about showcasing the multitude of amazing ingredients found across the country, helping shoppers buy what’s in season and focusing the spotlight on some fantastic, lesser known produce and breeds, launching to the Food Halls for the very first time.’

Isle of Man Manx Loaghtan Lamb is the last indigenous farm animal left in the Isle of Man.

After a period when the number of Loaghtan ewes dropped to near extinction, a handful of dedicated and enthusiastic farmers decided to reverse the downward trend.

The breed is now thriving, and produces a fantastic-tasting meat. It has just 5 per cent fat compared to 28 per cent in conventional lamb and about 15 per cent less cholesterol.