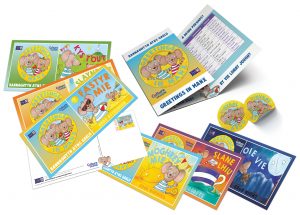 With an estimated forty percent of languages around the world said to be in danger of extinction, the United Nations General Assembly adopted a resolution proclaiming 2019 as the International Year of Indigenous Languages, in order to raise awareness of the potential threats to their future but also mobilise people into action for their preservation.

It’s claimed that most of these are indigenous languages, which in turn is said to put both the culture and knowledge systems to which they belong at risk. Additionally, these people can often be isolated both politically and socially which is reflected by their geographical location, history, culture, language and tradition.

The Manx language was famously declared extinct recently by UNESCO based upon the death of the last native speaker, Ned Maddrell, in 1974. But after an outcry by some of the estimated six hundred active speakers, including pupils from Bunscoill Gaelgagh (the Manx speaking primary school) UNESCO revised the Island’s language status to that of a living language.

In many areas the state of an indigenous language is believed to reflect that of its people, where it identifies origin or membership in a community – as well as the ethical values of their ancestors. However, unlike some countries the Manx language, which has successfully embraced modern technology, has received positive support from government, in conjunction with the countless volunteers who have devoted their time to keeping the Island’s native language alive.

Recognition of language instability is, however, growing, with a belief that a country’s language should be recognised as a strategic, national resource for development and reconciliation, with the ability to foster and promote local culture, customs and values; ultimately adding to the rich tapestry of global, cultural diversity.

The recent publication of Poems from the Edge of Extinction: An Anthology of Poetry in Endangered Languages by John Murray Press, on National Poetry Day, has also focused attention on this situation. Borne from the Endangered Poetry Project, this revolutionary publication, edited by Chris McCabe of the National Poetry Library, has brought together fifty poems from across the world where language has been identified as endangered, and includes a contribution from the Isle of Man by Bob Carswell, entitled Duillagyn Ny Fouyir or The Leaves of Autumn.

With one of the world’s seven thousand languages reported to be disappearing every two weeks, this anthology (with accompanying English translation and commentary) aims to preserve and reclaim voices which would otherwise die.

Chris McCabe said, “This book has grown from a simple idea I had in my role as National Poetry Librarian – to collect poems spoken, or written, in endangered languages throughout the world, which would help to document our understanding of how poetry exists globally.”

The anthology, which includes contributions from both new and established poets, identifies some of those languages perceived to be endangered and offers a unique insight into the culture of those vulnerable languages through the voices of their writers.