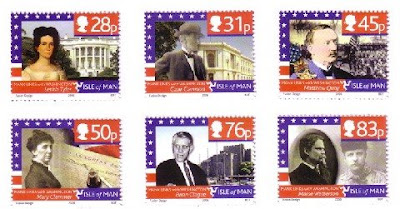 Six influential Manx-Americans are depicted in this issue of 2006 Manx stamps (I have a couple of sets if anyone is really interested) – some were household names – yet few people know that their roots lie in our tiny island.
Joseph Gurney Cannon
Ever walked past the Cannon House Office Building? That’s a memorial to Joseph Gurney Cannon, whose father emigrated around 1800. Joseph ‘Czar’ Cannon from Illinois was the most powerful House Speaker ever. He was such big news that on the day he retired in 1922, the first issue of Time magazine featured him on its front cover. And his influence reaches down through the years. Ever since he commanded it in 1904, bean soup has been on the menu in the House of Representatives Restaurant.
Mary Clemmer
The influential 19th century journalist, women’s rights supporter and author Mary Clemmer was born in Utica, New York. Her mother had emigrated from Peel. Mary made her own money through writing and lived on Capitol Hill where she was regularly sought out by politicians for her advice. It is widely believed that she coined the expression ‘First Lady’. This relates to an article she wrote after President Rutherford Hayes’ inauguration in 1877 when she described his wife as ‘the first lady of the land’.
Letitia Christian Tyler
Virginia-born Letitia Christian Tyler, wife of the 10th US president John Tyler, became First Lady in 1841 and could trace her ancestry back to the influential Christian family of Baldromma, Isle of Man. Letitia has the dubious honor of being the first President’s wife to die in the White House.
Senator Matthew Stanley Quay
Tracing his Manx roots through his father’s side, Matthew Stanley “Boss” Quay came from Pennsylvania where he dominated the politics of that state for more than twenty years. In a rollercoaster life he was awarded one of the first Congressional Medals of Honor for his bravery at the Civil War Battle of Fredericksburg, was Senator for Pennsylvania, became mired in scandal, was refused admission to the Senate, and was subsequently re-elected. Quay was credited with being the “kingmaker” responsible for the election of President Benjamin Harrison. Harrison, however, always credited his success to God. When he explained this to Quay at the end of his first term. Boss retorted, “Then let God re-elect you!”
Colonel Henry Watterson
Henry ‘Marse’ Watterson was a Florida-based newspaper owner credited with dissuading President Theodore Roosevelt from seeking a third term in office and with shaping Democratic party policy for more than two generations. He was awarded a Pulitzer Prize in 1918 for his editorials supporting US entry into World War I.
Ewan Clague
Ewan Clague was born in Washington state of Manx parents. He was Commissioner of Labor Statistics for the Department of Labor from 1946 to 1965 and led a team of statisticians responsible for America’s Marshall Plan, the economic and industrial aid program that played a major part in the economic recovery of Western Europe following the Second World War.