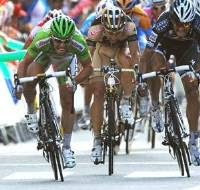 MARK Cavendish won the green jersey at a grand tour for the first time on Sunday afternoon after finishing second in Madrid in the final stage of the Vuelta a Espana. Leading rival Tyler Farrar by 12 points going into the 85km stage from San Sebastian de los Rayos to Madrid, the 25-year-old Manxman needed to ensure he finished no lower than fifth if the American won the stage, to become the first Briton in 21 years to win a green jersey at a grand tour. More at IOMToday.