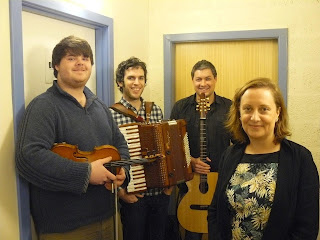 As Manx music continues to reach out to a wider audience, ‘trad power trio’ Barrule recently took the Island’s traditional music on a tour of UK universities and colleges which offer traditional music tuition.

This revolutionary musical journey was organised by Dr Chloë Woolley, Manx Music Specialist for the Manx Heritage Foundation, its aim to introduce local music to a greater audience through a series of workshops and concerts which would encourage traditional music students to add Manx music to their repertoire, stimulate research and ultimately develop links with the Isle of Man.
New trio Barrule is comprised of professional musicians Tom Callister (fiddle), Jamie Smith (accordion) and Adam Rhodes (bouzouki) whose workshops and concerts went down exceptionally well as they progressed on their mini tour of Scotland and north-east England.
Barrule performed at the National Centre of Excellence in Traditional Music in Plockton, Lews Castle College on Benbecula (Univesity of Highlands & Islands), the Scottish Gaelic College Sabhal Mór Ostaig on the Isle of Skye, the School of Celtic and Scottish Studies at Edinburgh University and Newcastle University.