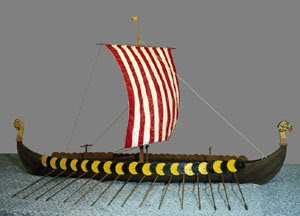 Last Friday I wrote a bit about the Gaelic roots of many Manx names, such as Leece (a shortened form of Mac Guilley Yeesey) and Looney (Mac Guilley Dhoonee).

One could also point to such names as Kelly (the same as Ó Ceallaigh in Irish), Kerruish (Mac Fhearghais), and Teare (Mac an tSaoir — Macintyre — son of the joiner or carpenter).

By now the Vikings among you are up in arms, affronted by all this rampant Celticity. “Where are the good, solid Norse names?” you might ask.

Keep your helmets on. They are there — albeit in Celtic dress. For example, Corkhill.

Corkhill may not look or sound very Norse, but it is a Manx version of Thorkelson – derived from “Mac Thorkel” or Thorkell. Thorkel allegedly was a Norse-Manx prince.

At the far end of the Hebrides from Mannin, the MacLeods of Lewis were known in Scottish Gaelic as Sìol Torcail or “The Seed of Thorkel,” another sign of their Viking heritage. (The MacLeods claimed descent from the kings of Man and the Isles — but that’s another story.)

How did we get from the sons of Thorkell the Viking to the Corkhills of Man?

Without going too deep into Celtic grammar, “Mac” changed the sound of the following name, with the “C” eclipsing the “T”. (It’s actually not just Thorkel but son “OF Thorkel” – a genitive form of the name. Now there’s grammar for you.)

The name was pronounced “Mac ‘orkel” and later just “Corkel” as the “ma” of “mac” was dropped – a common occurence in Manx by the end of the 17th century. The name was anglicised as “Corkhill” though any resemblance to a hill near Cork or one made of cork is purely coincidental.

For a glimpse of the life of a young Viking named Thorkel, click here.

Today, Marina Corkhill is head of internal operations at the Isle of Man International Business School. Her Viking ancestors would certainly appreciate the “international” part, and they definitely knew their business.

The evolution of the name is a sign of the fusion that took place between Norse and Celtic culture on the island, which was under Norwegian or Viking rule from about the 9th or 10th century until 1265.

The great Viking king of the Isle of Man, Godred Crovan, left us the name Gorree, which became Orry in Manx English, and Mac Ghorree or Orry today is Corry.

So let us doff our helmets to Godred, Thorkel, Magnus and Harald. Those of you in the Maryland-DC-Virginia region may want to go a bit further and join the Longship Company.