Manx National Heritage, the organisation responsible for protecting and promoting the Isle of Man’s heritage and culture, has nominated the Viking Horse Bridle Pendant that was found on the Island in October 2014 for recognition in a British Isles competition. The pendant was found by detectorist Daniel Crowe in the south of the Island.
The competition ‘The Nation’s Greatest Find’ is run by ‘The ‘Searcher’ Magazine, a magazine about the hobby of metal detecting. Nominations for the annual awards which have been running since 2005 are received from England, Scotland Wales and the Isle of Man. The Manx nomination will receive its own national trophy for most significant find.  The competition focuses on ‘significance’ rather than monetary value. 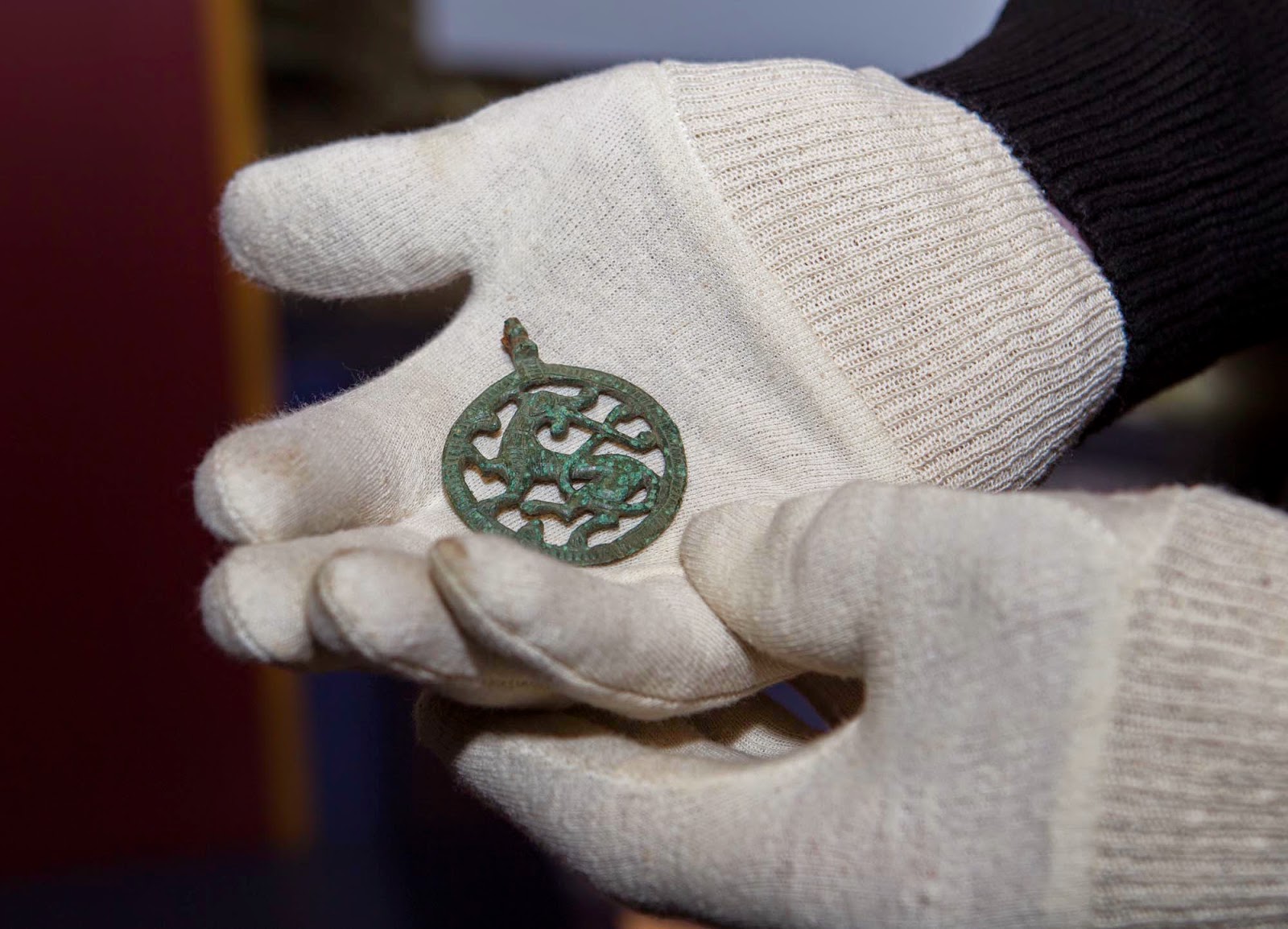 It is judged at the British Museum by Dr Roger Bland, Head of the Portable Antiquities Scheme (PAS) and Keeper of Prehistory and Europe, Dr Michael Lewis, Deputy Head of the PAS and Peter Spencer Numismatic Consultant for the Searcher. Additionally, Ed Vaisey, Culture Minister at the DCMS has been on previous panels and it is hoped that he will be available to judge again this year.
Allison Fox, Curator of Archaeology at Manx National Heritage, described the find and provided its context, explaining:

“This wonderful 4.5cm copper alloy pendant is a decorative feature on a horse bridle and would have adorned the forehead of a Viking’s horse.  Vikings were accomplished horse riders, often taking their animals on their ships when they were travelling to new lands.  Bridle decoration emphasised the power and wealth of the horse’s owner and this pendant would have been a magnificent golden colour when worn.” She continued:“This style was popular in northern and western Europe and the beast is shown gripping the inner edge of the pendant with its tail and tongue.  It dates to around AD 1100, a time when the Viking Kingdom of Man and the Isles was at its most powerful and the Isle of Man was the seat of power.  We know much about this period from documentary sources but the number of artefacts from this time is fewer than from the early centuries of Viking residence, so this wonderful addition helps us further picture the time of the Kingdom.”

-ENDS-
Notes to editors:
Discoveries of archaeological artefacts on the Isle of Man are required to be reported to Manx National Heritage at the Manx Museum in Douglas.  This reporting helps to build a fuller picture of the past of the Isle of Man by showing where people were active and what kinds of everyday things they were using.  Lots of finds are made by metal detectorists, but others are made by people out walking or even just digging in their own back gardens, and the curators at the Manx Museum are always happy to help identify finds.  Many such finds have been very kindly donated to the Manx national collections by their finders and the owners of the land on which they were found.
Rare discoveries of artefacts made from silver or gold on the Isle of Man may be classed as ‘Treasure Trove’.  These artefacts are also reported to Manx National Heritage, and the Coroner of Inquests then makes the judgement on whether an object is Treasure Trove.  If it is, then it is legally owned by the British Crown, but the finder may be entitled to a reward for reporting the discovery.  Up until the 1970s items of Manx Treasure Trove were added to the collections of the British Museum in London.  Now, gold and silver artefacts can remain on the Isle of Man and many are displayed at the Manx Museum in Douglas and more will be displayed in a new gallery at the House of Manannan.