Manx National Heritage, the organisation responsible for protecting and promoting the Isle of Man’s heritage and culture, has come up with a brand new iMuseum (www.imuseum.im) giving its online audiences an even better view of the nation’s history and collections.

Working together with one of the leading heritage software suppliers Knowledge Integration and the IT expertise of Government Technical Services, Manx National Heritage’s iMuseum now offers more exciting ways of curating, searching, sorting and displaying the nation’s collections, including easy ‘share this’ links for visitors to post what they find on Facebook and Twitter  Also coming soon will be new and easier ways for users to post comments and have conversations in real-time on anything they find in iMuseum.
The look of iMuseum has also changed with a new homepage created by web designers Gooii and a new Collections Blog  but perhaps most exciting in this new phase of iMuseum is the release for the first time of zoomable images.  Using high-quality digital images, these give users the chance to zoom-in on images of the collections, most notably at this stage thousands of images from the Photographic Archive and Art Collection.  Now, online visitors to iMuseum can zoom-in on a detail captured in a Victorian photograph or the brushwork on a painting.
iMuseum sees Manx National Heritage join a recognised online heritage community with Knowledge Integration delivering similar solutions to the Museum of London, Royal Museums Greenwich, National Museum Wales, Imperial War Museum, Fitzwilliam Museum and Norfolk Museums Service.
Manx National Heritage’s iMuseum contains a wide selection of the content that is on display at the organisation’s eleven sites around the Isle of Man as well as thousands of items currently not on gallery display and available to view on request or in the Manx Museum Reading Room, including objects, documents, letters, paintings and images.  Content is now added and updated automatically every night, overnight.
The content now available to search for free on iMuseum consists of over 58,000 objects and items, with over 25,000 photographs of the island’s people, places and events digitised from the Isle of Man’s National Photographic Archive. In addition, there are over 2,000 artworks from the National Art Collection including the Manx Museum and National Trust’s entire oil painting collection and all the Archibald Knox works while over 32,000 items from the National Library are also now available to search.
Manx National Heritage has also started its year-long project to publish onto iMuseum and Archives Hub (http://archiveshub.ac.uk/contributors/manxnationalheritage.html) descriptions of all its major Manuscript Archives, making the Island’s unique written history even more widely known to a worldwide research audience.
As well as the collections, the iMuseum is the Isle of Man’s definitive online family history resource with free access to fully-searchable names indexes transcribed from original archives. There are almost 370,000 named individuals from census’ between 1841 and 1911, almost 200,000 baptisms, over 110,000 marriage entries and almost 180,000 burials recorded in the Parish Registers as well as files detailing over 73,000 named parties on Registered Deeds.
For individuals and organisations looking to research the Island’s war history, the records include details of over 12,000 First World War internees and 11,615 named individuals recorded on the Isle of Man’s war memorials.
Edmund Southworth, Director, Manx National Heritage, commented:
“iMuseum version 2 is an excellent opportunity for us to manage and make our extensive collections more accessible to the Manx public as well as an off island audience.  It extends the reach and potential audience for our collections and offers us a greater ability to effectively promote ourselves worldwide and create a platform for a greater understanding of the Island’s heritage and culture.”
As part of the upgrade programme, the iMuseum building on Kingswood Grove is no longer open daily to the public although visitors can still use the service in the Manx Museum Reading Room and existing regular bookings will still use the facility. The venue is available to hire through Event Management Solution, who manage external hires on behalf of Manx National Heritage.
Edmund Southworth commented:
“With the growth and development of technology to access content, it makes sense to focus our resources and budgets on developing our online service rather than operating a physical building for people to carry out online research.” 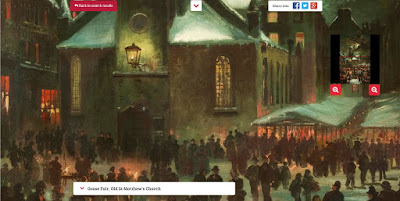 Description: On first viewing, Hoepfner has produced an almost Dickensian view of the Douglas market, with its stalls groaning under the weight of geese destined for the Christmas table and the warm red glow of oil lamps in the windows. The painting is a study of light and darkness played out in a series of smaller scenes. The warm glow of the red light from the houses and the braziers (probably roasting chestnuts) in the market contrasts with the chill of the cold moonlight breaking through the dark ominous clouds and reflecting off the snow-covered roofs. Whilst the bottom half of the painting glows with a picturesque luminescence, the top half could be an illustration for a Gothic ghost story. Hoepfner has chosen an angle which makes the surrounding houses and church loom over the market place. He appears to have exaggerated the height of the buildings so that they tower somewhat forebodingly over the scene. The crowds in the marketplace appear as dark, anonymous figures, their faces only half-illuminated by the fires with only a handful of them having recognisable features.

Background: Franz Hoepfner was well-known in the early 1890s for his large scale paintings of the Isle of Man, many of which provided the decoration for the tourist venues of Douglas, such as the Derby Castle. This view of Old St Matthew’s Church and market is therefore typical of the large dramatic canvases he produced. Old St Matthew’s Church was built from 1708-1711 by Bishop Wilson. A century later, Johnson’s Guide (1850) disparagingly described it as ‘an old and ungainly edifice’. It was demolished in 1895 to allow for the redevelopment of the open-air Douglas market. Today the site is occupied by the market hall and the British Legion Club.
Comparisons: It is useful to compare this canvas to Quayle’s colourful day-time interpretation of the market in full-swing in early summer. Both works record a scene that was about to disappear forever.
Materials: Oil on canvas
Manx National Heritage Collection: Art Collection ID number: 2003-0024
Buy a print via searching Goose Fair at www.imuseum.im