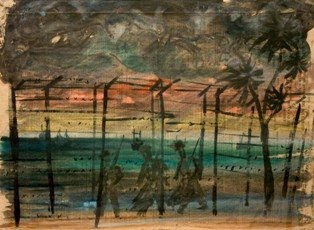 Hugo Dachinger was arrested in June 1940 under Churchill’s policy of the mass internment of ‘enemy aliens’. He was interned first in Kempton Park transit camp, then Huyton Camp, Liverpool and finally in Mooragh Camp, Isle of Man. Although only interned for seven months, Dachinger produced a vast quantity of artwork, of…ten painted on newspaper. Whilst in Mooragh Camp and following his release in January 1941, Dachinger staged exhibitions of his work entitled ‘Art behind barbed wire’. See some of Dachinger’s work in the Manx Museum Art Gallery and hear more about Artists in Exile in our fascinating talk on Saturday 10th April 2010 at the Manx Museum Lecture Theatre (2.30pm). Hosted in conjunction with the Forced Journeys Exhibition currently on display at the Sayle Gallery in Douglas.
Become a fan of Manx National Heritage on Facebook. Go to www.facebook.com and enter Manx National Heritage in the Search box. When the page opens, click, Join.