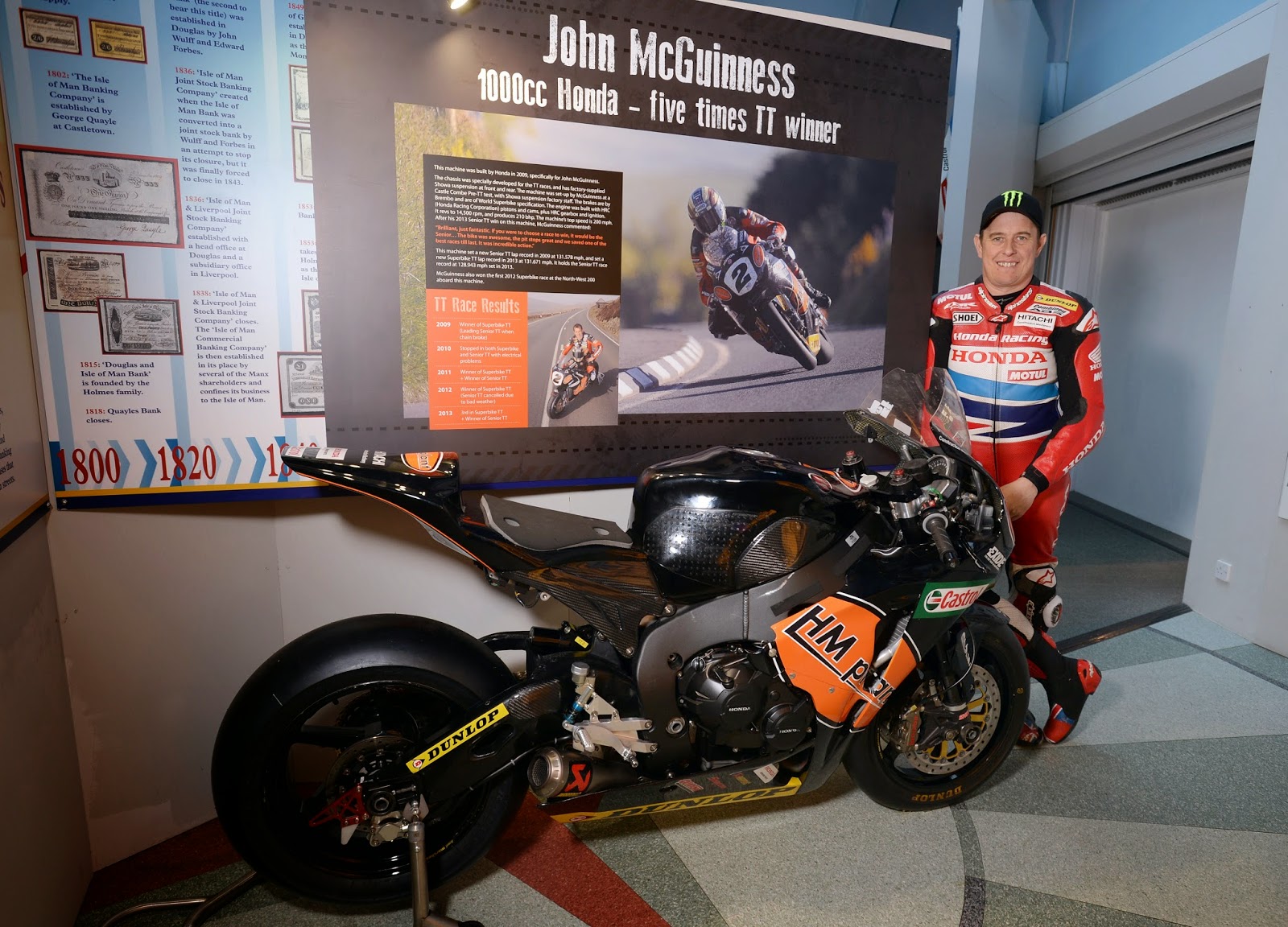 Manx National Heritage, the organisation responsible for protecting and promoting the Isle of Man’s heritage and culture, is exhibiting one of the most successful machines in the TT’s history in the Manx Museum in Douglas, courtesy of leading Japanese manufacturer Honda.
John McGuinness’s Honda CBR1000RR Fireblade is now on show in the Social History gallery as part of Manx National Heritage’s TT display, which also includes other memorabilia, notably a set of Carl Fogarty’s leathers, Dave Molyneux’s 2004 TT winning garland, the fairings from Jock Taylor’s 1980 TT race win and a pair of Steve Hislop’s gloves. Trophies on display include some of Mike Hailwood’s replicas and Bob McIntyre’s 1957 Junior TT trophy.
McGuiness raced the bike between 2009 and 2013, winning the Superbike TT from the same year as well as his double race victories in 2011 and the 2012 Superbike TT.  It is also the bike that he raced in the 2013 meeting, finishing third in the Superbike race before memorably triumphing in the Senior TT.
As well as the five TT victories, it is the bike on which McGuinness set a new Senior TT lap record in 2009 at 131.578 mph and a new Superbike TT lap record in 2013 at 131.671 mph. It holds the Senior TT race record at 128.943 mph from 2013.
The bike was built by Honda in 2009, specifically for John McGuinness. The chassis was specially developed for the TT races and has full factory Showa suspension front and rear from HRC. It was set-up by McGuinness at a Castle Combe Pre-TT test with Showa suspension factory staff. The brakes are Brembo full World Superbike specification. The engine was built with HRC Pistons and Cams, plus HRC Gearbox and Ignition. It revs to 14,500 rpm, produces 210 bhp and has a top speed of 200 mph.
The bike will be on display from March 2015 to March 2017, which will include both this year’s and next year’s TT and Festival of Motorcycling. Other bikes on display in the museum include Mike Hailwood’s 1979 Senior TT winning Heron Suzuki, his last race on the Island, Carl Fogarty’s 1992 0W01 Loctite Yamaha bike from the memorable Senior TT race of that year as well as Frank Whiteway’s 1970 production TT winning Suzuki.
After his 2013 Senior TT win, McGuinness said of the bike:
“Brilliant, just fantastic. If you were to choose a race to win, it would be the Senior… The bike was awesome, the pit stops great and we saved one of the best races till last. It was incredible action.”
Matthew Richardson, curator, Manx National Heritage commented:
“We are very grateful to Honda Racing for loaning us such a prestigious bike with such a strong TT history. It will undoubtedly be of great interest to visiting and resident bike fans, and will complement our other TT memorabilia.”